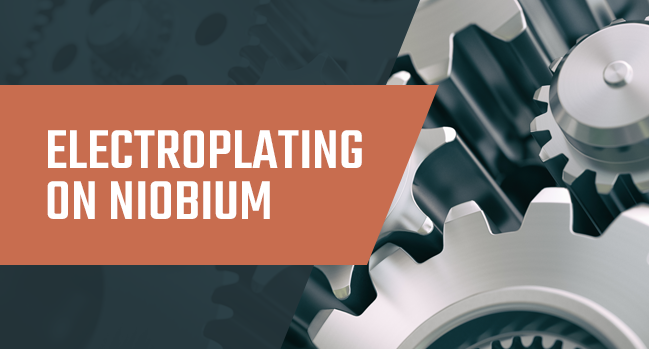 Niobium, also sometimes called Columbium, is not as well known as some other metals, but it has unique properties that make plating onto it an appealing prospect for those in various industries.

The discovery of niobium was not clean cut, due in large part to its similarity to and simultaneous occurrence with tantalum.

In 1801, English scientist Charles Hatchett first discovered the element. He found it in an American ore in the Hans Sloane collection in the British Museum. John Winthrop the Younger, the first governor of the state of Connecticut, had sent the ore to England more than 100 years earlier.

In 1844, a German chemist named Heinrich Rose found what he believed was a new element. It was, however, the same one that Hatchett had discovered several decades earlier.

Rose found it alongside tantalum and named it niobium after Niobe, a figure from Greek mythology who was the daughter of Tantalus, the Greek mythological hero from which tantalum gets its name.

In 1864, a Swedish scientist named Christian Blomstrand became the first to isolate the metal. He did so by heating it in a hydrogen atmosphere and thereby reducing the chloride.

After a great deal of debate, the scientific community concluded that columbium and niobium were the same elements. For about 100 years, the element was called columbium in the United States but called niobium in Europe.In 1949, the International Union of Pure and Applied Chemistry agreed to the international adoption of the name niobium.As a compromise, tungsten became the official name for element number 74, rather than wolfram, although it still has the chemical symbol W.Despite the agreement, use of the term columbium has persisted in some places,such as the U.S. metallurgical industry. 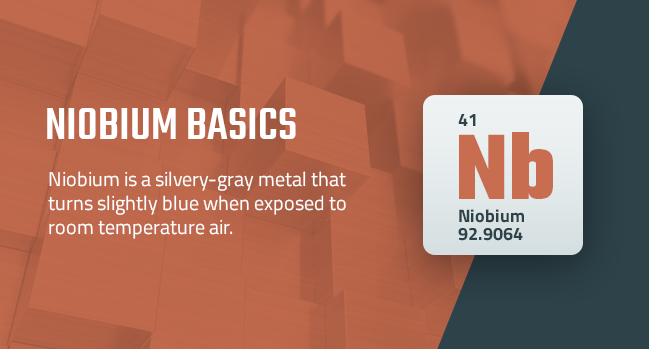 Niobium is a silvery-gray metal that turns slightly blue when exposed to room temperature air. Its appearance is similar to that of steel or platinum when polished.

It is a transition metal, part of group five of the periodic table, has an atomic weight of 92.9064 and has the atomic symbol Nb. It has 28 isotopes with known half-lives, the mass numbers of which range from 83 to 110. Natural niobium occurs as its one stable isotope niobium-93.

Niobium is also a refractory metal. The refractory metals are a group of exotic metals that can retain their hardness and strength even when subjected to extreme heat and exhibit several other unique properties as well that make them useful for a range of manufacturing processes. The other refractory metals include:

One can not find niobium by itself in nature. Instead, it's found in minerals known as the niobite-tantalite group. In addition to the obvious niobite-tantalite, this group also contains pyrochlore, euxenite, tantalite and niobite, which is also called columbite. Considerable quantities of niobium have been found associated with carbon-silicate rocks, also called carbonatites, and calcium sodium niobates. Some of the largest known deposits are in Canada, Brazil, Russia, Nigeria and the Democratic Republic of Congo.

These minerals also often contain tantalum. Niobium and tantalum share many properties but have one major difference. Tantalum is about two times as heavy as niobium.

The processes used for producing niobium are rather complicated, mainly because of the need to separate it from tantalum.

It is possible to separate niobium from these other substances by forming an oxide and then reducing it using hydrogen and carbon. The separation process uses a solvent to extract the element in a liquid-liquid process after which the niobium is precipitated. The processor must then roast it to niobium pentoxide (Nb2O5), which then gets reduced to a powder using hydriding and metallothermic processes. Vacuum sintering or electron-beam melting further consolidate and purify the powder.

Another method for obtaining niobium involves electrolysis of fused salts or the reduction of fluoro complexes using a reactive metal.

Niobium is often alloyed with metals before use, including iron, nickel and cobalt.

For Plating with Niobium

Niobium's unique characteristics make it valuable for many different applications across numerous industries. Alloying niobium with other metals or plating other substances onto it can substantially enhance many of these properties.

Niobium is a very versatile metal, as you can fabricate it to many different strengths and elasticities. In its pure form, it is soft and ductile. It is a six on the Mohs hardness scale. 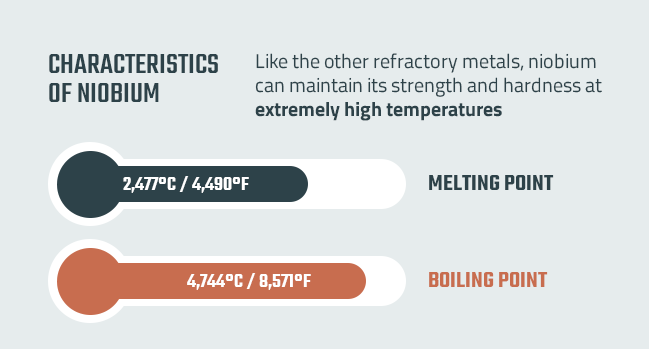 The density and thermal neutron cross-section of niobium are lower than that of the rest of the refractory metals. Its density at 20 degrees Celsius is 8.57 grams per cubic centimeter.

Niobium is a conductor of electricity. It has an electrical conductivity of 6.7×106 siemens per meter. At cryogenic temperatures, it has superconductive properties.

To enhance the refractory properties of niobium without adding weight, you can alloy it with various other metals such as nickel, iron and cobalt. Niobium alloys are typically very strong.

Niobium offers excellent resistance to corrosion but is vulnerable to rapid oxidation at temperatures of around 400 degrees Celsius or 750 degrees Fahrenheit. The oxide film is what enables it to be so resistant to corrosion. Plating onto it with other metals can help to increase its resistance to oxidation. It also reacts with carbon, nitrogen, sulfur and the halogens.

At room temperatures, it is inert to acids, even aqua regia, which is strong enough to dissolve gold and platinum. It can be attacked, however, by hot, concentrated acids, especially alkalis and oxidizing agents. 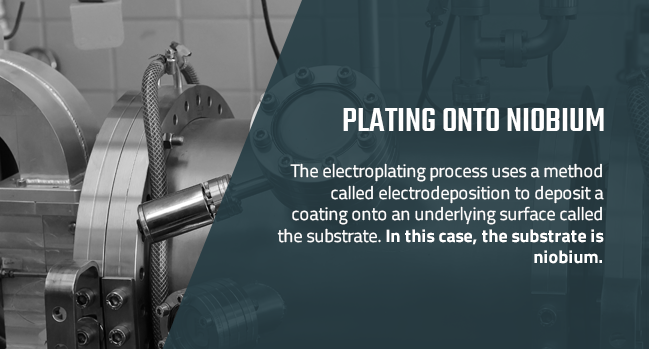 You can plate various metals onto niobium to enhance the qualities you need for your application. The process for plating onto this metal is more complicated than some others, and you must carefully prepare the surface before plating can begin. With the right tools and expertise, though, it is feasible.

Various processes have been used to prepare for plating onto niobium. These processes may involve cathodic treatments that cover the substrate with a hydride, which eliminates etching and enables improved control of dimensional tolerances. The part might also undergo heating and vacuum firing and anodization. The surface will also likely undergo cleaning to improve the effectiveness of the plating process, which may involve soaking the material in an alkaline cleaning solution and many other techniques.

You may end up with different results depending on the specifics of the process used. That is why it's crucial to have highly specific procedures in place to ensure reliably high-quality results. The chemical composition of the plating bath, the temperature of the plating bath, the voltage of the electrical current, the length of time the current is applied and the distance between the cathode and the anode are all important variables that must be exact to achieve good quality.

You might plate a metal for many different reasons, including increasing corrosion resistance, strength, heat resistance, conductivity or other beneficial properties. When electroplating onto niobium, you might do so to improve the surface's resistance to oxidation or hot, concentrated acids. Oxidation presents a challenge when working with niobium, as the metal needs to be placed in a protective atmosphere if it will be exposed to high or moderate temperatures.

Applying a coating that has better oxidation resistance than niobium enables you to have the beneficial properties of the metal in an atmosphere where oxidation might otherwise be a problem. Sometimes, the outer layer acts as a sacrificial coating. It becomes oxidized or corroded and protects the underlying substrate. 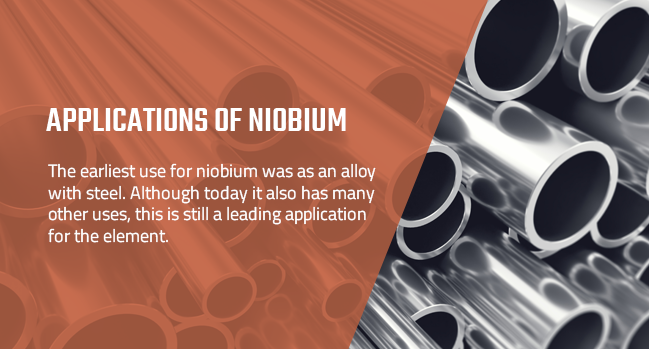 The earliest use for niobium was as an alloy with steel. Although today it also has many other uses, this is still a leading application for the element. Various industries also often alloy it with other metals, such as iron, cobalt, nickel, zirconium and other nonferrous metals. It also plays critical roles in the creation of nickel-based superalloys and high-strength, low-alloy steels.

It mixes well with many different substances, including iron, and it is best dissolved in a mixture of hydrofluoric and nitric acids.

One of the uses of niobium in regards to stainless steel is to increase stability when welding or heating, as it can be added to some stainless steels in the form of ferroniobium. Because of the strength of niobium alloys, the energy industry often uses them in pipeline construction. It is also used to increase the strength, as well as the resistance to shock and erosion, of cemented carbides used as cutting tools and hot-pressing dies.

An alloy's strength, heat resistance capabilities and relatively low weight make it extremely useful for the aerospace industry. You can find niobium in rocket and jet engines, airplane gas turbines and other equipment that must have excellent heat resistance. Niobium has seen use in many high-profile airframe systems, including those used in the Gemini space program.

The downside of niobium for the aerospace industry is its susceptibility to oxidation. Because of this vulnerability, it must be plated before use in many aerospace applications.

As mentioned earlier, niobium is also a superconductor at cryogenic temperatures. Because of this quality, it commonly plays a critical role in the manufacturing of superconductive magnets used in scientific research. It's used in the form of niobium-zirconium (Nb-Zr) wire, which can retain its superconductivity even when exposed to strong magnetic fields. Magnets made using niobium can be used in particular reactors, MRI scanner and nuclear magnetic resonance spectroscopy equipment.

Some researchers believe that Nb-Zr wire could someday play a role in large-scale power generation. It is useful in building cryogenic electronic devices that have low power consumption.

Niobium's low capture cross-section, compatibility with uranium and resistance to corrosion caused by molten alkali-metal coolants make it a useful substance for the nuclear industry. It can be used either by itself or as an alloy with zirconium in claddings for nuclear reactor cores. 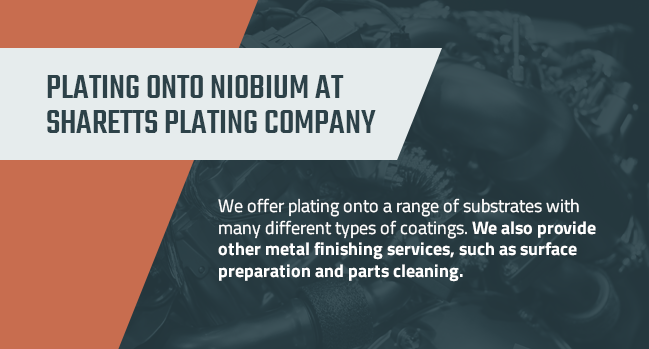 Plating onto niobium is challenging, but doing it successfully can provide many benefits for companies across a range of industries. To be able to take advantages of the benefits that plated niobium provides, you need to work with a plating company that has the skills, equipment and processes to produce high-quality plating onto niobium substrates reliably.

If you choose to partner with Sharetts Plating Company, that's precisely what you'll find. SPC is an industry leader when it comes to plating onto niobium. Our team of engineers, scientists and production personnel have the skills to bring you the niobium plating solutions you need, and our plating equipment is cutting edge. We will work with you to develop the ideal solution for your business

We offer plating onto a range of substrates with many different types of coatings. We also provide other metal finishing services, such as surface preparation and parts cleaning.

To learn more about us and the services we provide, please browse our website and contact us with any questions you may have. We can also provide you with a free, no-obligation quote. Simply fill out this form, and we will be in contact with you within one business day.

Contact SPC today to learn more about the future of plating with molybdenum and how it could help you take your manufacturing operation to a higher level.