Semiconductors are the foundation of the electronics industry. These partially conductive products include transistors, chips and other electronic control parts, and are integral to electronic equipment from mobile phones to cars and robots.

Today, companies create most semiconductor chips using silicon plated with another material. This outer coating protects the semiconductor from outside elements and connects it to the outside world. These plating materials can be anything from tin to gold, and each has a unique set of traits with different effects on the finished product.

To help better understand the role of plating in the manufacturing of semiconductors, here is a guide to semiconductor plating.

Chips, LED lights, and transistors are all made with semi-conductive materials like silicon. This means the material has characteristics of both conductors and insulators, but doesn't fit into either category. In order to produce these parts, the material must undergo several manufacturing processes:

As discussed, plating is one of the last steps in the semiconductor manufacturing process, but holds an important role as protective shell and interactive layer between the semiconductor's internal circuits and the outside world.

Manufacturers often plate semiconductors using a process called electroplating. Also known as electrodeposition, this process deposits a thin layer of metal on the surface of a work piece referred to as the substrate. The basic process is as follows:

The result of this process is a thin exterior coat of metal for the semiconductor. This layer can be stacked atop or between other layers until the desired thickness is reached.

The Benefits of Plating for Semiconductors 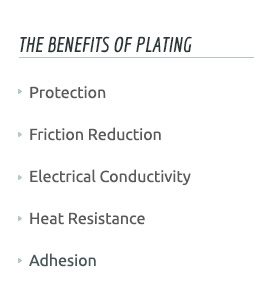 The electroplating process itself multiplies these benefits, which improves corrosion resistance, enhances electrical conductivity, increases the solderability of the substrate and protects it against wear.

The electroplating of tin, also called "tinning", is a cost-effective alternative to plating with gold, silver or palladium. Unlike these materials, tin is abundant and cheap, although it's not as conductive as other materials. Additionally, tin has the disadvantage of forming sharp protrusions, called whiskers, which can damage any materials surrounding it. SPC has developed a way of avoiding this by using a tin-lead alloy. This alloy naturally reduces the occurrence of these protrusions, and does not require an undercoating, unlike tin. Tin and its various alloys are used in semiconductors for corrosion protection.

Recent concerns over the impact of heavy metals on the environment have led researchers to search for replacements to the lead soldering used to connect electrical components. In an effort to become lead-free, many companies are turning to pure tin, which has good adhesiveness, to solder. Tin can also eliminate the need for lead soldering when used as a plating material.

Most people are aware of copper's exceptional conductive properties, which is why copper plating for semiconductors is quite common. This soft metal is extremely valuable in electronics manufacturing, offering both electrical and thermal conductivity. While it's possible to use it by itself, copper often receives an additional metal coating to prevent corrosion and enhance the electrical properties of the other materials.

Nickel plating is valued for its evenness and chemical resistance. This material is often used to protect against corrosion, or as a base layer for gold or silver. Nickel often appears as an alloy, combined with zinc or palladium to take on some characteristics of these metals.

Another precious metal, silver is also used for plating. While less expensive than gold or platinum, silver still offers several important benefits, including thermal and electrical conductivity, corrosion resistance and compatibility with several other types of metals. Manufactures often use silver to provide a coating on more active copper parts, because of its low contact resistance and strong soldering characteristics.

The primary drawbacks for silver include its relatively high cost and its tendency to tarnish. This tarnishing tends to reduce the shelf life of most silver-plated products.

Gold plating for semiconductors is very expensive, but highly valued. This coveted metal is highly conductive and heat resistant, and serves as an excellent barrier to corrosion. Most commonly, gold plating is applied on top of nickel, which acts as a corrosion inhibitor by preventing rust from penetrating pores in the surface of the gold layer. It also prevents the diffusion of other metals into the gold surface, causing it to tarnish. This tends to happen with zinc and copper.

The cost of the material is its only downside, and as a result, gold layers tend to be as thin as possible for the application.

For Plating for Semiconductors

Palladium is a relatively soft metal, making it a poor plating material in its pure form. However, palladium-cobalt alloys are excellent plating materials, as manufactures can easily control the thickness of the material. Palladium-cobalt also offers protection against corrosion and wear. Palladium-nickel is another popular alloy of palladium commonly used in applications requiring low surface contact resistance.

Recent hikes in gold prices have led professionals to consider palladium and palladium-alloy plating as a cheaper alternative, saving up to 90% of plating costs. Additionally, palladium is less dense than gold, resulting in lighter finished products with the same coating thickness. Though previously scorned for its lesser performance compared to gold, palladium and its alloys are now a leading alternative in efforts to replace and reduce gold in the plating industry. It's now often found in electronic and semiconductor manufacturing.

Platinum is an extremely rare and expensive material, even more expensive than gold. However, platinum is an exceptionally smooth-surfaced and durable material that protects against corrosion. Manufactures primarily used it as a protective coating on low-voltage, low-energy contacts.

Platinum plating has recently attracted attention for its applications to fuel cells. Fuel cells are a new, more eco-friendly system of electricity generation. These fuel cells work by combining hydrogen and oxygen to create water — this reaction generates electrical energy. Platinum electrodes are used at the center of this system, but are currently being modified to reduce the costs of fuel cells before they begin mass production.

How to Choose the Right Plating Material

Above all other metal plating considerations, it's important to consult an expert with experience in the craft. An expert can discuss potential problems and considerations that can affect your final plating decisions.