Palladium is a precious metal with numerous properties that make it an excellent choice of plating material, especially in the automotive and electronics industries. SPC has developed a palladium plating process that reliably provides a high-quality coating for various components and products. Keep reading to learn more about palladium plating, including its characteristics, benefits, drawbacks and applications.

In some cases, you may need to perform palladium plating according to industry specifications.

ASTM B679 - 98 (2015) is the standard you are most likely to encounter. The specification, published by ASTM International, lays out requirements for electrodepositing palladium coatings for engineering applications, as well as palladium coatings with thin gold overplates for use in electrical contact applications. It requires indicating the base metal used, the thickness of the palladium coating, the thickness of any underplates and the grade of any gold overplates. It also establishes requirements for sampling and testing coatings and defines standards of purity, adhesion, appearance, ductility, thickness and integrity.

MIL-P-45209B, the military standard for electrodeposited palladium plating, was once also common. However, the U.S. Department of Defense has canceled the standard and now refers manufacturers to ASTM B679 - 98. The ASTM standard contains some unique requirements for plated components for which the U.S. government or an agent of the government is the purchaser.

Below, you'll find the answers to some of the most common palladium plating questions.

Palladium is a natural element with the chemical symbol Pd and the atomic number 46. It is the least dense and has the lowest melting point of the six platinum metals. It is also a precious metal and shares many characteristics with the other metals in that group. It is a soft metal known for its semi-bright, silvery-blue appearance, as well as its low density and melting point. It makes an excellent catalyst and component of alloys.

What Are the Characteristics of Palladium?

As mentioned in the above section, palladium is easy to recognize due to its somewhat bright, silver-blue appearance, its low density and its low melting point. It has a density of 12 grams per cubic centimeters, a melting point of 2,830.6 degrees Fahrenheit and a boiling point of 5,365 degrees Fahrenheit. Platinum is soft and malleable when annealed, and cold-working can increase its strength and hardness. Perhaps palladium's most unique property is its ability to absorb hydrogen in amounts of up to 900 times its volume. Hydrogen diffuses through heated palladium, which purifies and separates the gas.

What Is the History of Palladium?

As early as the beginning of the 18th century, miners in Brazil had discovered a metal they referred to as ouro podre, meaning "worthless gold." Ouro podre was, as we now know, an alloy of gold and palladium. This alloy was not the material from which people first extracted palladium, however.

William Wollaston of the United Kingdom gets credit for the discovery of palladium. In 1803, he discovered the element by absorbing platinum in aqua regia, which consists of nitric acid and hydrochloric acid. When he did so, some material did not go into the solution and remained as a residue. Wollaston extracted palladium from this residue. He did not immediately announce his discovery, but instead sold it as "new silver." In 1805, he revealed that he had discovered the metal and described its properties. Palladium takes its name from the asteroid Pallas, which German astronomer Heinrich Olbers identified around the same time.

Where Does Palladium Come From?

Most palladium mines are in Russia and South Africa, and other leading producers include Canada and the United States. Most often, it is a byproduct in refining copper and nickel ores, and is also a component of gold and silver ores.

What Does Palladium Electroplating Involve?

During the palladium electroplating preparation process, we begin by carefully examining the basis material and thoroughly cleaning it via processes such as preheating, polishing and ultrasonic cleaning. As the plating cycles occur, maintaining the proper strikes of palladium and nickel ensures maximum adhesion.

What’s the Cost of Plating With Palladium?

In the past, palladium often served as a less expensive alternative to gold. In recent years, however, the price of palladium has increased as the supply of the material has struggled to keep up with the growing demand. This increase in demand is due largely to its use in catalytic converters in automobiles. Although the cost of using palladium has increased, its many beneficial properties mean it may still be the right choice of material for specific applications. You can also get many of the positive attributes of palladium at a lower cost by alloying it with other metals such as nickel and cobalt.

What Are the Benefits of Electroplating With Palladium?

Why might you choose to use palladium for electroplating? Some of its benefits include the following:

What Are the Potential Drawbacks of Plating With Palladium?

Palladium has many beneficial properties, but there are some disadvantages to using it that may make other metals a better choice in specific applications. Some of these drawbacks are as follows.

What Are Some Common Applications of Palladium Plating? 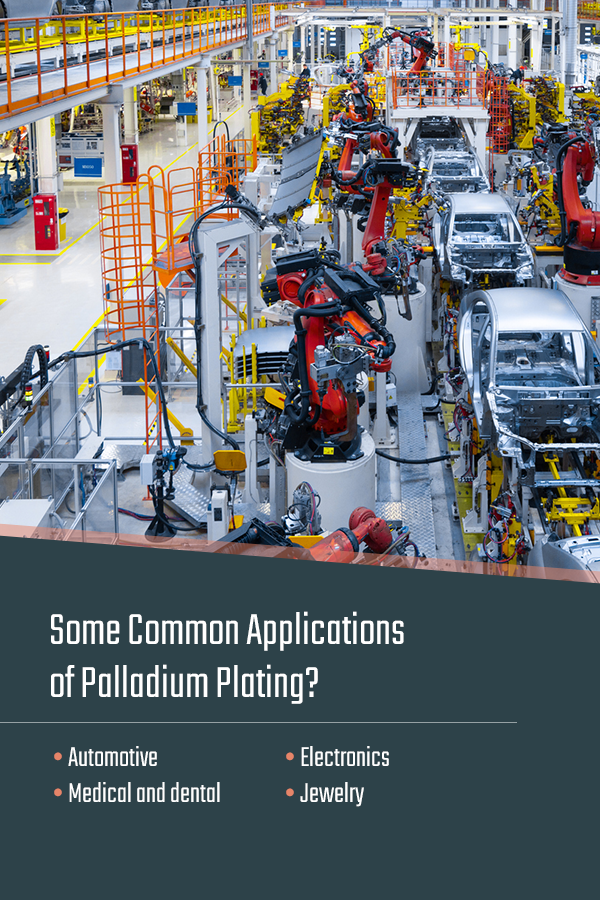 Leading metal finishing companies such as SPC are now using palladium for numerous electroplating applications across a wide range of industries.

What Are the Alternatives to Plating With Palladium?

When choosing metals to use for plating, two of the most common alternatives to palladium are gold and rhodium. Here's how palladium compares with these two metals.

Palladium and gold share many properties, but there are also some differences between them. Here's how they compare:

Another alternative to palladium is rhodium. Here's how these two metals compare:

What Metals Can Alloy With Palladium?

It's common to see palladium alloyed with other metals such as nickel and cobalt. Manufacturers may use these alloys, rather than pure palladium, for plating because of their lower costs, as well as the enhanced properties they provide. Here's a look at palladium-nickel and palladium-cobalt alloys.

What Are Some Everyday Palladium Electroplating Issues?

Other issues to look out for include blistering in the plating, sharp edges, cleavage points, cold shuts and pitting.

The SPC Advantage in Palladium Electroplating

SPC takes a “quality-first” approach to providing the most effective and reliable palladium plating solutions to our valued clients. Our broad palladium plating capabilities come from a combination of vast industry experience and modern innovation. With a cutting-edge, 70,000-square-foot South Central Pennsylvania facility and a dedicated team of scientists, engineers and production experts, we can meet any palladium plating needs.

To learn more about how the SPC palladium electroplating process can benefit your business or to receive a no-obligation quote for our services, contact us today.

CONTACT US TO LEARN MORE ABOUT OUR PALLADIUM PLATING SERVICES

To learn more about how the SPC palladium electroplating process can benefit your business or to receive a no-obligation quote for our services, contact us today.

Find out more information about our palladium plating services