Take a quick look around your home or office, and you’ll undoubtedly see something that is either made of or contains copper. This abundant and extremely versatile metal has played an important role in the human existence for more than 10,000 years. While copper is no longer the primary ingredient in pennies, which consisted of 95% copper until 1982 (they’re now made of copper-coated zinc), this soft, reddish brown metal is a primary component in many manufacturing and industrial processes. Major copper applications include electrical wiring, plumbing, roofing and industrial machinery. Copper is also a commonly used metal in the electroplating industry.

Copper is a naturally occurring chemical element that is mined from the crust of the earth. Mined copper sulfide deposits contain approximately one percent copper. Extracted copper is relatively soft, which in part explains the presence of one of its most notable characteristics: its excellent electrical and thermal conductivity. Copper is second only to silver in these two areas; however, it is much less expensive than silver. Copper is also naturally resistant to corrosion. It reacts with the oxygen in the atmosphere to form a layer of copper oxide that protects against rust. However, copper will tarnish when exposed to sulfides.

History of Copper Use

While humans have been using copper for about 10,000 years, the actual process of extracting copper from its ores began approximately 7,000 years ago. It took another 2,000 years for people to discover the soft copper could be strengthened by alloying it with other metals. The first known alloy created by humans was bronze, which is a combination of copper and up to 25% tin. This led to what became known as the Bronze Age, where many tools, cookware and other products were made from bronze. Brass, which is an alloy of copper and zinc, was first developed about 2,500 years ago.

Over the centuries, copper has been used for many purposes. The Ancient Romans used copper mined in Cyprus for currency. In fact, copper’s chemical symbol of Cu was derived from the Latin word “cuprum,” which means “from the island of Cyprus.”

The Swedes made use of copper currency to fund their war efforts during the 17th century. Copper also became a material favored by many sculptors during the Renaissance period. The daguerreotype, a forerunner of the modern photograph that was developed in the 19th century, consisted of a piece of silver-plated copper. The Statue of Liberty was even sculpted from copper by French sculptor, Gustave Eiffel.

Electroplating copper onto other metals has been a widespread industrial practice for many years. Electroplating is a procedure where a metal part, known as a substrate, is placed in an electrolyte solution. An electrical current is then introduced into the plating bath, which deposits a thin metal coating onto the surface of the substrate. Electroplating can be used for a number of purposes, such as enhancing corrosion and wear resistance, improving electrical and thermal conductivity, adding aesthetic appeal and promoting adhesion. The three basic types of copper electroplating include:

Need for Copper Plating onto Plastics 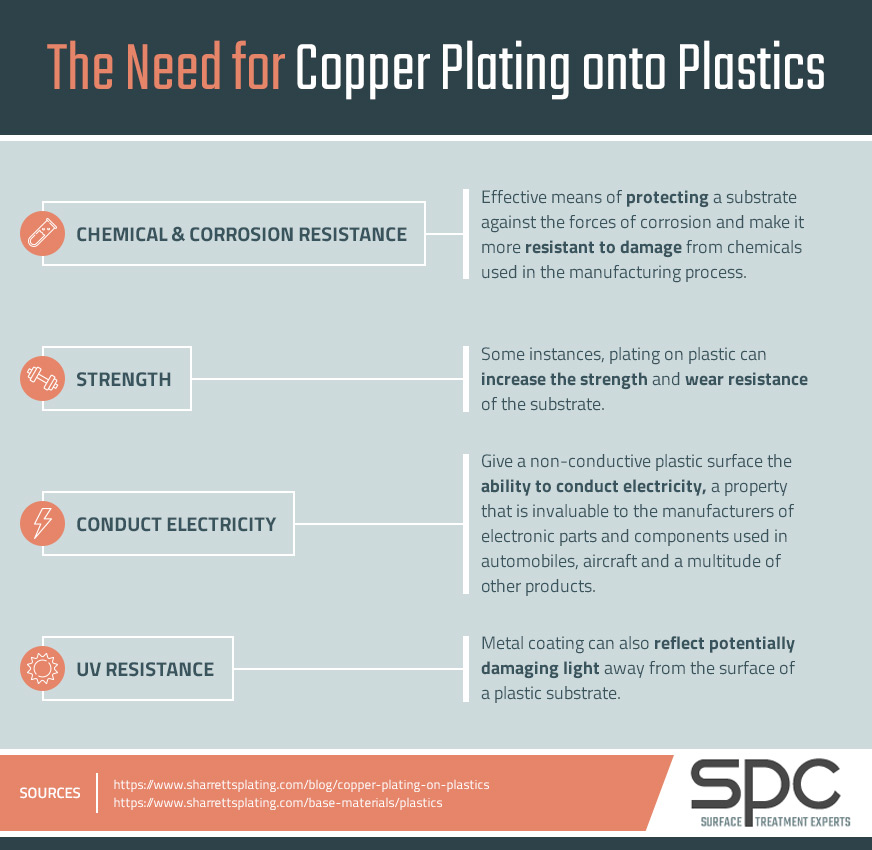 Copper’s excellent electrical and thermal conductivity makes it an attractive choice for electroplating on substrates where these properties are essential for the performance of the product. Other common copper plating applications include being an undercoat to promote adhesion, working as surface preparation prior to soldering, building thickness and acting as a heat stop-off for masking.

One of the most beneficial features of copper plating is its relatively low cost, especially when compared to electroplating processes involving precious metals such as gold, silver and palladium. Copper also offers high plating efficiency and excellent surface coverage, while being less hazardous to the environment than many other types of plated metals.

Copper plating is not limited to metal-on-metal applications. It can also be extremely effective when used with non-metallic surfaces, particularly plastics. The copper coating will “metallize” the non-metallic surface, which can make it electrically conductive and provide additional benefits such as strengthening and protecting the substrate. Plating on plastics can also add a metallic shine to the finished product, which is an advantage in manufacturing applications where appearance is important.

Evolution of Plating on Plastics

Prior to the 1960s, plating on plastic was primarily used for aesthetic purposes. Effective processes that provided the coating adhesion required for more demanding industrial applications had yet to be developed. Eventually though, technological advances in chemical processing techniques enabled the widespread use of commercial plating on plastic processes. Industries where plating on plastic is implemented today include automotive, plumbing, appliance and electronics manufacturing.

Polypropylene is regarded as the first plastic that could be plated on successfully. Today, ABS (acrylonitrile-butadienestyrene), which is used to manufacture numerous products such as golf club heads, automotive trim components, drain pipe systems, luggage and various household and consumer goods, is by far the most widely plated plastic. Other “plateable” plastics include:

Perhaps the most common application of plating copper onto non-metallic surfaces is the process of copper plating on plastic. This process is primarily used in situations where it is necessary to make the substrate electrically conductive. Although plating on plastic has come a long way, it is still a difficult procedure to execute effectively, and only a few companies have mastered the process.

Remember that copper plating, and electroplating in general, relies on electrodeposition to coat the substrate. Unlike many metallic substrates, however, plastics do not conduct electricity. In order for the copper ions in the bath to adhere to the surface of the substrate and to ensure the part is otherwise prepared for the electroplating process, it is necessary to perform a number of preliminary steps:

While nickel or copper may be used to formulate the plating solution, nickel is now generally the preferred commercial electroless plating process. Nickel baths are easy to control and will provide a desirable uniform plating result. It is recommended to run the part through either a Watts nickel or electrolytic copper strike afterwards to build up the electroless nickel deposit after initial part metallization.

Implementation of the Copper Electroplating Process

Once the electroless nickel coating has been applied, the plastic part is now ready for electroplating. Copper plating on plastic is performed in essentially the same manner as when plating on metallic surfaces. Here is a simplified explanation of the steps involved in the copper electroplating process:

A copper-plated plastic object could tarnish, which can be prevented by a post-treatment cleaning. Polishing can also enhance the part’s resistance to corrosion and add a shine that will improve its appearance.

In general, the longer you apply the electrical current, the thicker the copper coating that is deposited onto the plastic substrate will be. The length of immersion time will also impact the final result when electroplating copper onto plastic, as will the bath temperature and the level of voltage. As a rule of thumb, choose the highest voltage level that achieves the desired plating outcome, while avoiding the formation of bubbles in the electrolyte solution.

Whether you are performing copper plating on plastic or a metallic substrate, following a few helpful troubleshooting tips can increase the likelihood of a positive outcome:

Contact us to learn more about our copper plating services and to receive a no-obligation quote today. You can also schedule an on-site copper plating consultation.