What Do You Know About Plating on Plastics?

While plating is most commonly viewed as a finishing process for metals, it can be used with great success on non-conductive materials as well. In particular, plating on plastic resins can be extremely effective in a wide range of industrial applications. Applying a metal coating on plastic is a high-precision process that can be customized for functional and decorative purposes. A key difference between plating on plastic and plating on metal substrates is that the former requires a more highly specialized procedure to achieve the desired result.

The History of Plating on Plastic | What Types of Materials Can Be Used for Plastic Plating?

What Are the Benefits of Plating on Plastic? | The Basics of the Plastic Plating Process

Types of Electroless Plating on Plastics | Electroplating for Additional Thickness

The History of Plating on Plastic

Plating on plastic is not a new concept – the commercial practice originated in the 1960s in North America and Europe. However, the process did not gain widespread acceptance at first, as it was difficult to achieve a strong bond between the plastic substrate and the metallic coating. This issue was eventually remedied through the implementation of a chromic acid-based etchant that was used for surface treatment on a thermoplastic polymer known as acrylonitrile-butadiene-styrene (ABS). This process enhanced the plastic’s adhesive properties.

The automotive industry was the first to implement plating on plastic on a large scale. During the 1970s, rising fuel prices led automakers to develop new manufacturing processes that would result in improved fuel economy for their vehicles. American auto manufacturers, in particular, were facing a stiff challenge from smaller Japanese imports that offered the benefit of better fuel efficiency. The car companies discovered that using lighter metal-coated plastic materials in the production of automotive parts – such as grilles, emblems and light bezels – helped to reduce the overall weight of the vehicle, leading to better gas mileage.

As the technology for plating on plastics continued to improve, other industries began to implement the process as well. Applications that became popular during the 1970s and 1980s included:

What Types of Materials Can Be Used for Plastic Plating?

While ABS is still used in approximately 90 percent of plastic on plating applications, other plastic resins can be plated effectively. These resins include:

Plastics that are not known for their “plateability”are highlighted by the Valox (PBT) family of performance-matched polyester resins, which includes polyethylene, polyester and PVC. There are some plastics that can only be plated in blended form. These include members of the Noryl family such as urethane, xenoy and xylex, as well as nylon polymers such as polypropylene, PEEK and PPS. As a rule of thumb, the higher the chemical resistance of the resin, the more difficult it is to plate.

As far as the types of metals, copper plating on plastic is a common industrial practice, especially for applications where electrical conductivity is required. Other metals that are amenable to plating onto plastic include chromium, gold, silver and nickel. In some instances, multiple layers of various metals may be applied.

What Are the Benefits of Plating on Plastic?

Aesthetics are an important benefit of adding metal to a plastic substrate. A coating of a metal such as gold or silver, for instance, can significantly brighten the appearance of a plain plastic surface. It can also add a touch of color. It can enhance the substrate’s resistance to corrosion and even strengthen the plastic in some cases.

Additionally, the metal coating can increase the resistance to certain types of chemicals that may be used in various manufacturing processes or may be present in the environment.

The Basics of the Plastic Plating Process

Before the actual plating process can begin, it is first necessary to mold the plastic part and make it suitable for plating. Proper molding will alleviate stress on the part and eliminate surface imperfections that can reduce overall quality. The molded part should meet specific parameters regarding polishing, drying of the resin and proper melt temperature.

Because plastic is obviously non-metallic in composition, it’s essential to “metallize” the plastic substrate prior to electroplating in order to improve its adhesive properties. This is achieved through electroless plating, which is the process of depositing metal onto the surface of the substrate without the introduction of an electric current into the plating bath. The steps involved in the electroless plating process can vary but typically include some form of the following:

Types of Electroless Plating on Plastics

Electroless plating on plastic can further be broken down into two different categories: all-over plating and selective plating. With the former, the metal is deposited over the entire surface of the plastic substrate at a thickness ranging from 40 micro-inches (1 µm) to 2,000 micro-inches or 0.002″ (50 µm). All-over plating is considered to be the most cost-effective form of plating on plastic.

Selective plating includes depositing the metal onto specific surfaces of the plastic part or component, as opposed to the entire object. The parts are never exposed to aggressive chemicals, which prevents any unwanted changes to the color or texture. Selective plating can achieve a thickness level ranging from 40 micro-inches (1 µm) to 400 micro-inches or 0.0004″ (10 µm). The more precise nature of the selective plating process generally makes it more expensive than all-over plating.

Electroless plating can be employed on its own or used to provide an underlying layer for an electroplated coating. Electroplating on plastic is desirable when additional thickness is required. By introducing an electric current into the plating bath, the rate of deposition can be increased by as much as 10 times.

One drawback of electroplating on plastic is that it’s usually more expensive than electroless plating. It’s also more difficult to achieve a uniform thickness on the substrate, as the thickness tends to build faster on the edges than on the surface. Any substrate containing deep recesses in the surface is not a good candidate for electroplating, as the plating solution can easily become trapped.

Troubleshooting Tips and Other Plating Advice

The plating on plastic process can be tricky, and there are many errors that can produce an undesirable outcome. Here are a few troubleshooting tips to help you avoid mistakes during each stage:

Insufficient adhesion – Poor adhesion during the etching step is usually the result of a chromium concentration that is too high. This can be remedied by changing the chemistry of the etchant.

Overly shiny parts after etching –
If the parts are brighter than desired after etching, it typically means that the etching process didn’t occur for a long enough time frame and needs to be lengthened.

Warped parts – When parts warp during etching, it means that the temperature was too high and/or there was too much tension on the rack.

Chromium solution dripping off part – Another common issue is that the parts may be dripping when removed from the neutralizer. If the neutralizer bath exhibits an orange color, it usually indicates that the bath is spent and should be replaced with a fresh solution.

Silver sheen on activator bath surface – The presence of a silver sheen indicates that the stannous ion level is low and needs to be replenished.

Roughness on parts after activator bath – Rough edges on the parts could be a sign that particulates found their way into the bath, requiring additional filtering of the bath solution. It could also mean that the stannous level is too low and needs to be raised.

Large areas that fail to plate – If large portions of the parts are not plated, it often indicates under-acceleration or too low of an accelerator temperature. Raising the temperature or agitating the solution may correct this issue.

The Resurgence of Plating on Plastics

Plating on plastics was extremely popular during the 1970s and into the 1980s. However, a shift in consumer tastes that began in the 1990s and continued into the early 21st century resulted in a lower demand for metal-plated plastic products. This change had a significant impact on the auto industry in particular, as vehicle owners across North America and Europe became less enamored with the bright trim and gleaming metal finishes on automotive parts. 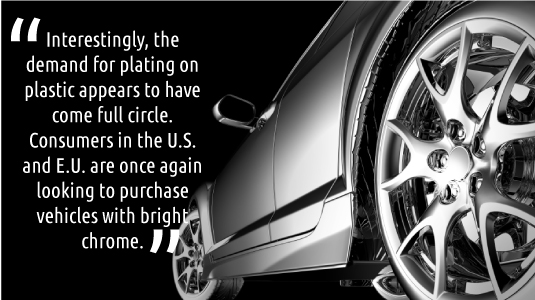 Interestingly, the demand for plating on plastic appears to have come full circle. Consumers in the U.S. and E.U. are once again looking to purchase vehicles with bright chrome. Environmental concerns have caused an increase in the production of lighter, more aerodynamic cars. There has also been a renewed call for metal-plated plastic products in other industries such as plumbing and electrical and electronics manufacturing.

At SPC, our extensive expertise includes plating on various types of plastic resins. We can perform both nickel and copper plating on plastic for companies in a wide range of industries, including automotive, consumer electronics, clothing manufacturing and more. With nine decades of metal finishing experience to draw upon, we can design a customized plastics plating process that meets your company’s requirements.

To learn more about our electroplating on plastic process, please click here. You can also contact our plastic plating company for additional information and to receive a no-obligation price quote for our services.
*Please note that Sharretts Plating does not plate with chrome. This content is for educational purposes only.